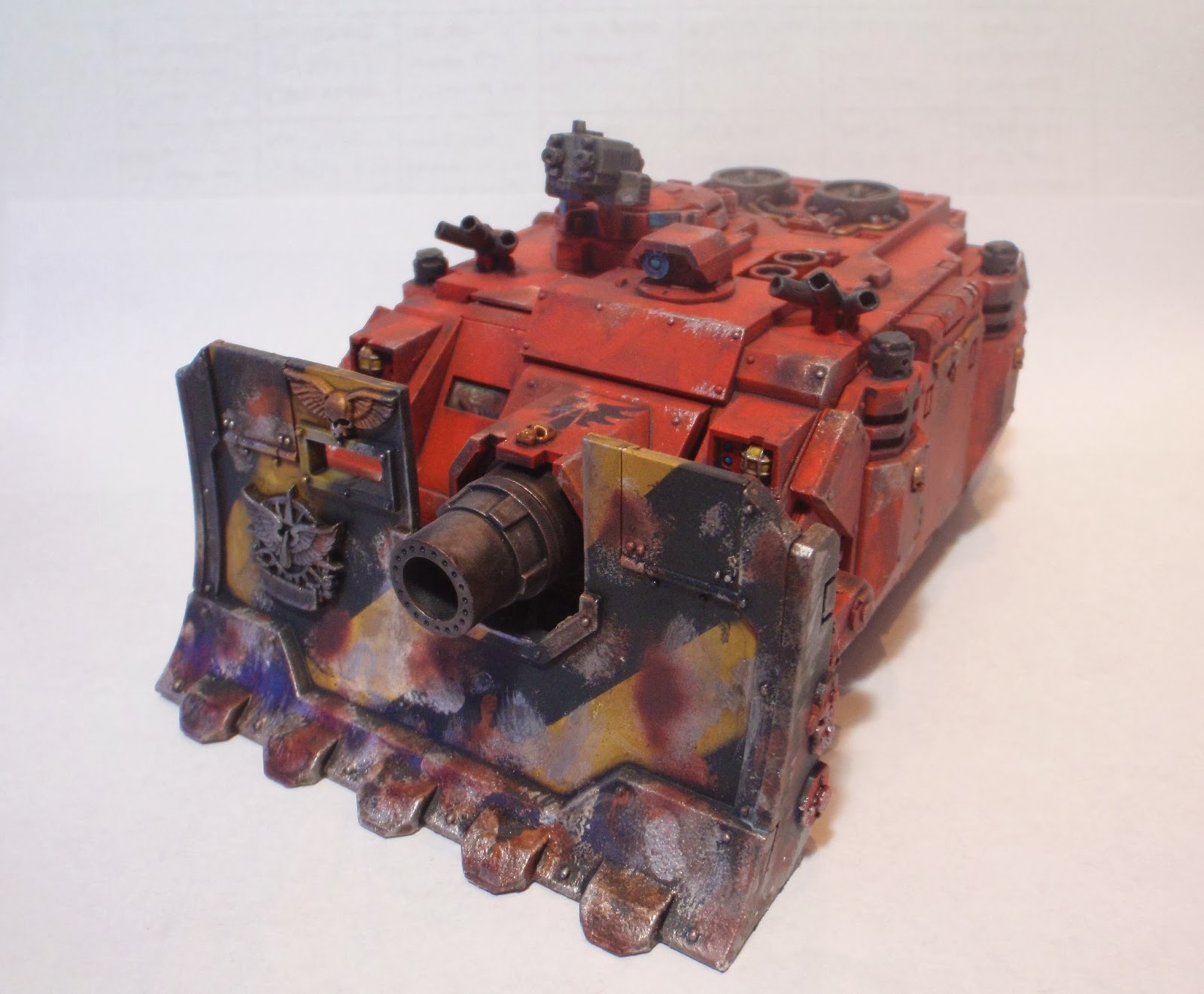 
recently I saw some tutorials about weathering  tanks and decided to give it a go. I had one Vindicator that was half way through it's completion and I used it as guinea pig.
I basically painted it the same way I always paint, all the way till the end...just left the Manufactorium production line...sparkling new. Once finished and with a varnish layer, I started the weathering process. 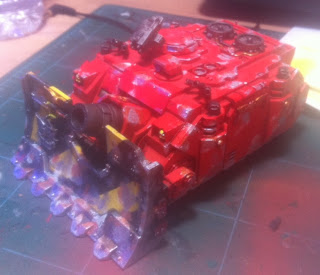 at the end of it....the tank looked like having a severe case of chickenpox. Obviously I wasn't happy...so what to do next?....first I applied with the airbrush a red primer that I have from valejo, in order to make some of the marks disappear and bring back more of the base Blood Angels red. By applying it I realized that the primer red tone was what I wanted for the rust effect....so I went back and replaced, using airbrush all the previous brown/red with that primer too. 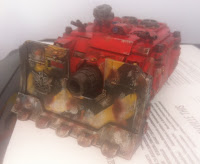 For the BA red, with the airbrush I brought back the tone I wanted in the areas that I made the weathering disappear.
After all that ,I prepared a 50/50 wash of Agrax Earthshade and Nuln Oil from GW and applied sparingly all over the miniature with the intention to swab the excess with a cue tip . Some how it dried so fast that I barely could remove it as I wanted....another learned lesson...if you intend to swab things, make sure you do a session at a time instead of the whole model!
A still wanted to give mud effect to the miniature...and add some snow but when I mixed the snow for application it just didn't got to the right consistency...I dropped those 2 last steps...applied a layer of future (that I use as a Gloss Varnish) straight from the bottle to the airbrush and once dry a layer of matt varnish...Vallejo straight from the bottle with airbrush.

Well..that's it for now....it was a great experience, lots of frustration but I certainly learned a lot in the process... for sure will invest more on weathering moving forward. 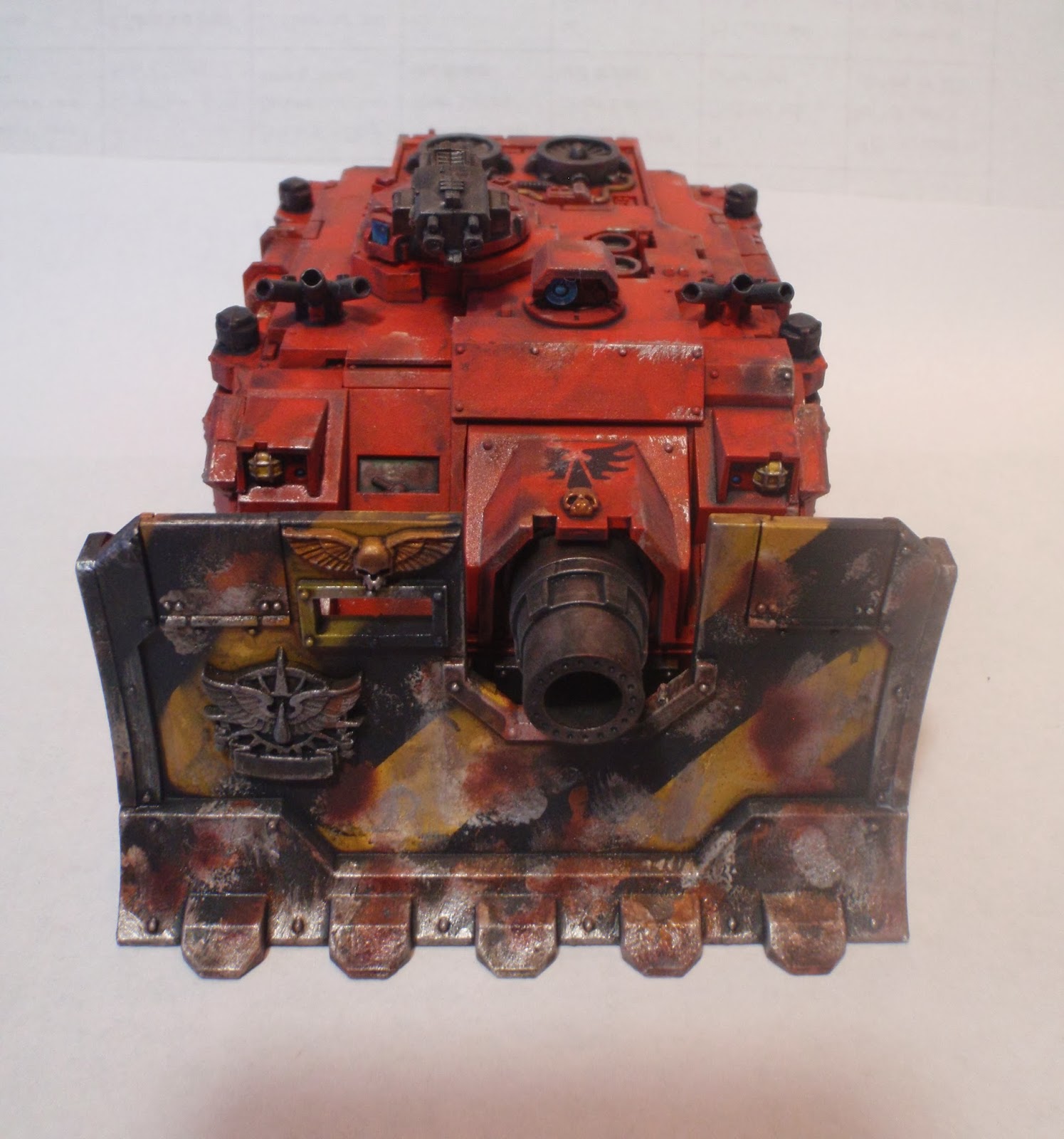 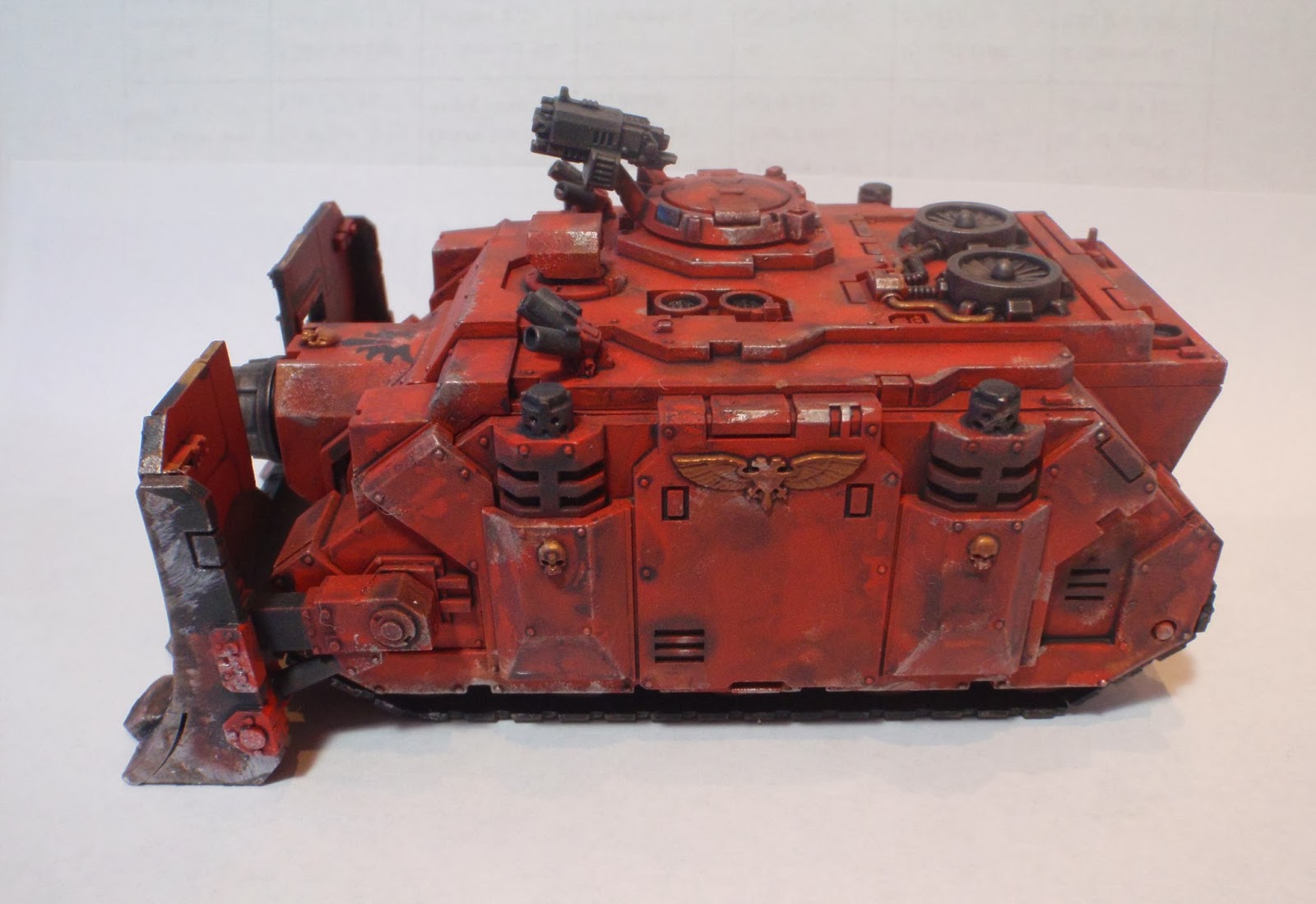 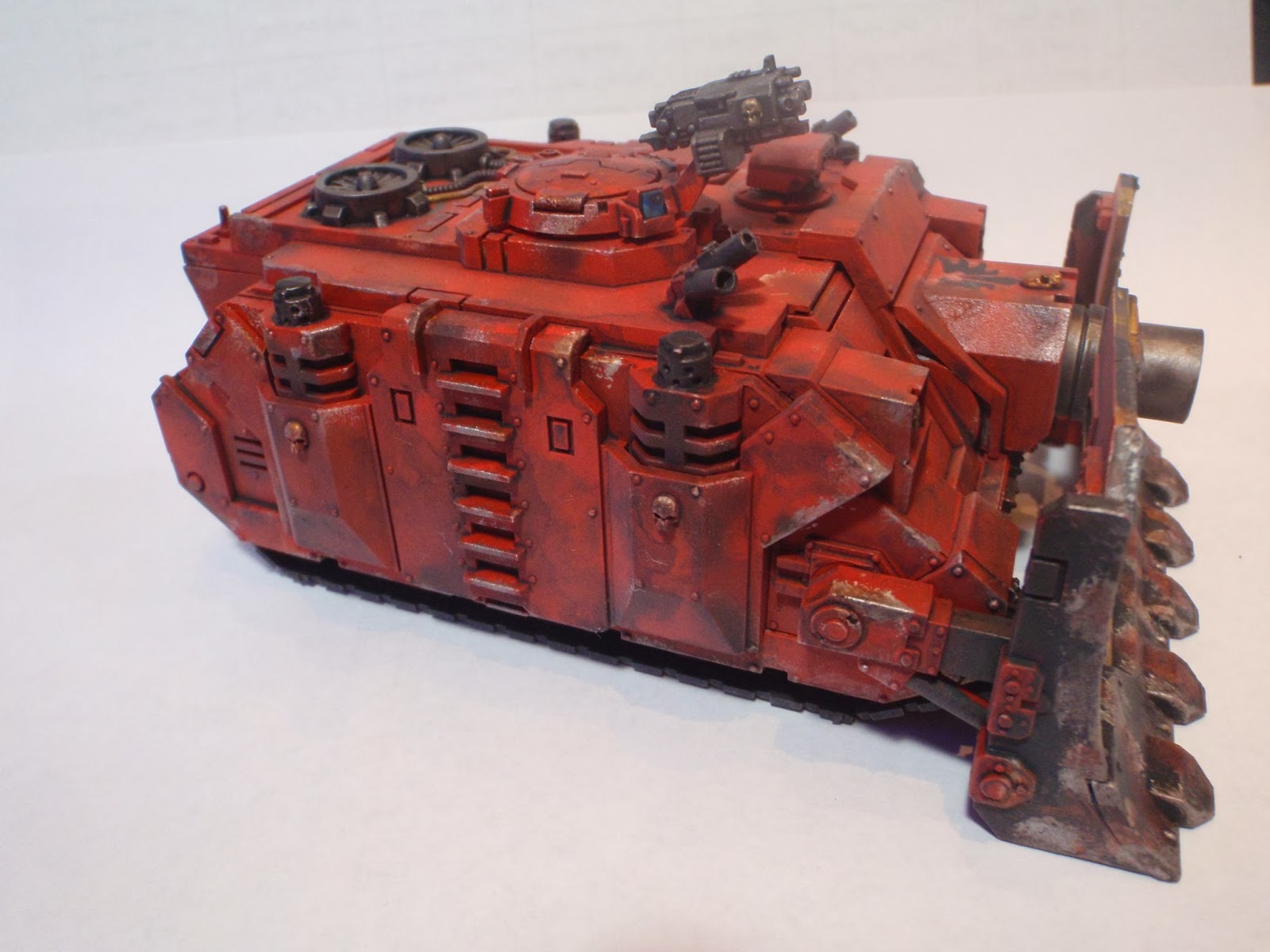 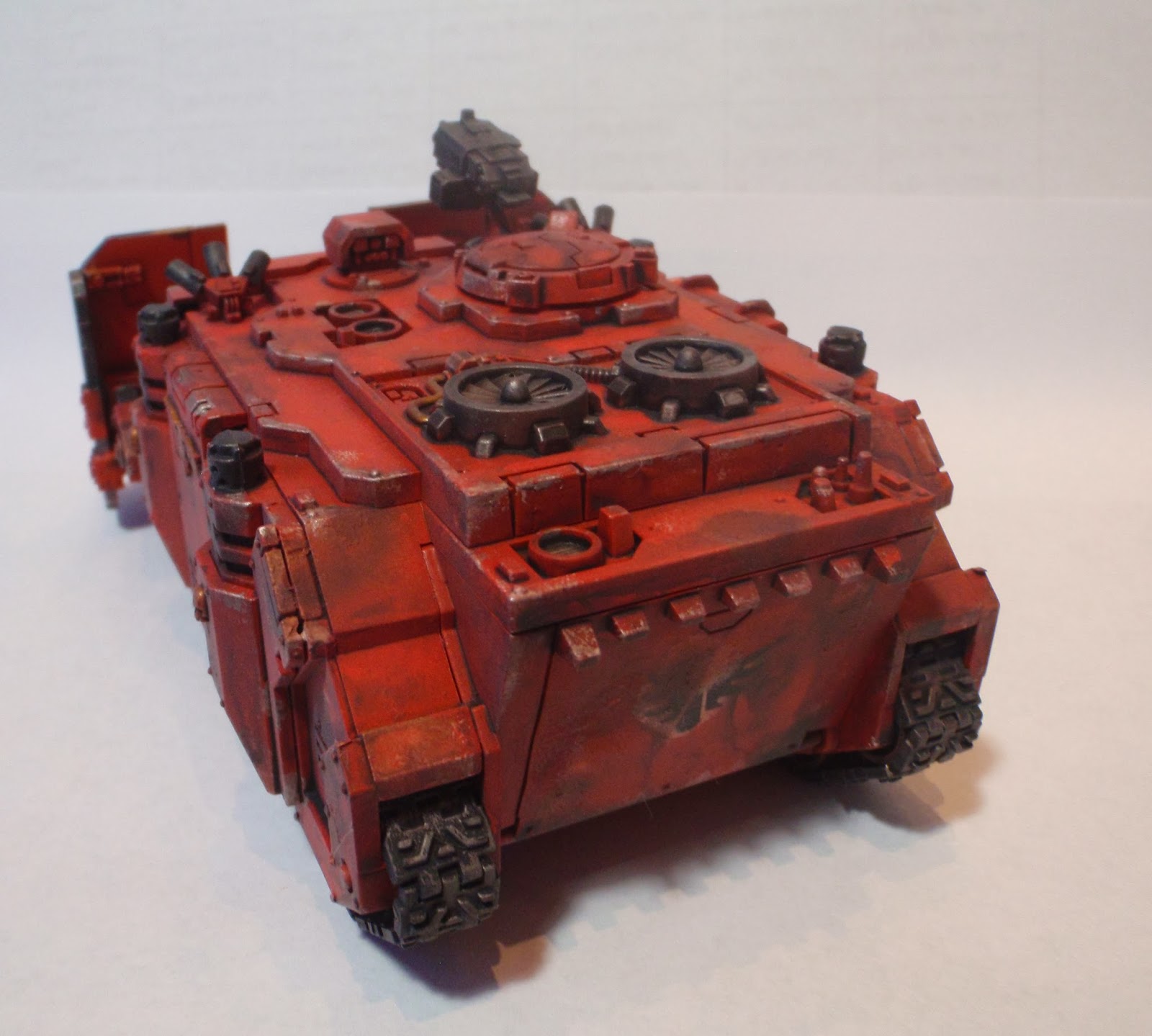